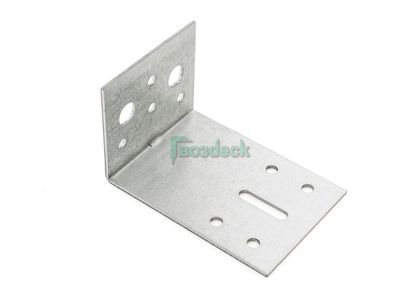 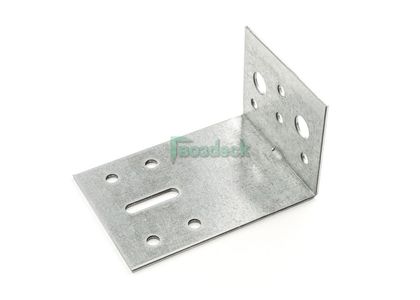 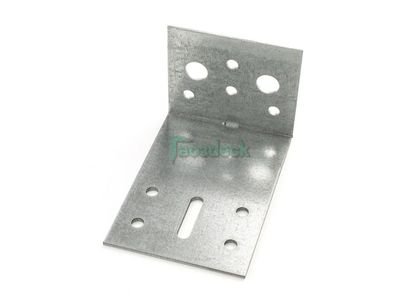 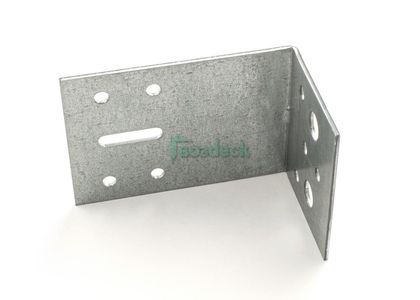 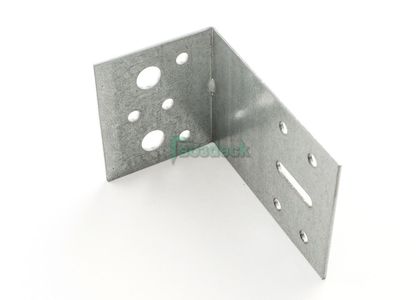 Façade bracket is a mounting element for attachment of the decorative façade to the bearing wall.

Façade bracket is intended for the system of ventilated facades (SVF) with wood surfacing material.

The main elements of SVF Gwozdeck are original brackets – façade bracket (FB) and façade angle bracket (FAB). FB and FAB are used for attachment of the subsystem to the bearing wall. They have several mounting holes and provide the reliable attachment to any type of bearing support. FAB is recommended for decoration of window apertures and quoins. It is advised to use battens treated with preservatives as a vertical subsystem boarding. An outstanding feature of FB and FAB is an original range of dimensions, total absence of thermal bypasses, rational mix of holes.

The space between bearing wall and decorative façade is filled by heat insulation which thickness is calculated from requirements to energy-savings, usually it is between 100 and 200 mm. 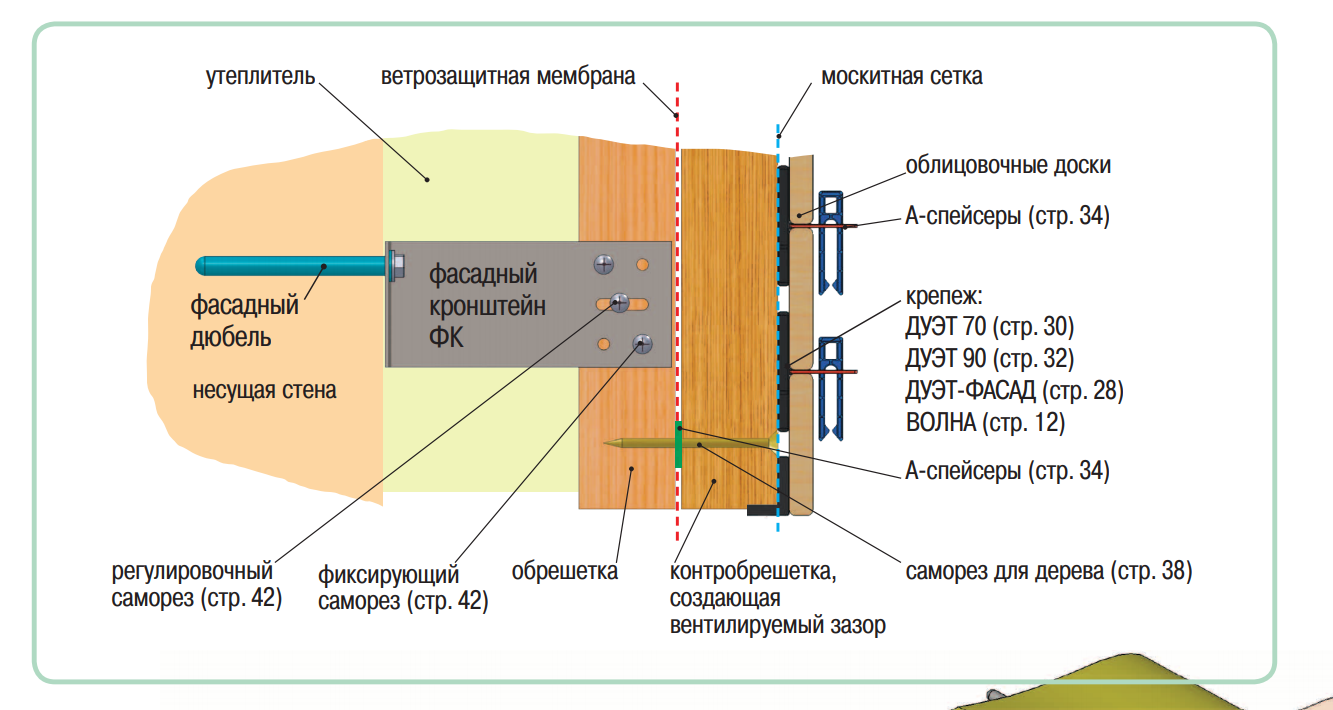 Depending on the base together with FB there are used different mounting elements: expansion bolts or chemical anchors, expansion studs. The most popular are expansion (façade) studs which size is chosen according to the type of base.

Façade stud consists of two parts: sleeve and expansion element. Expansion elements are made from steel with strength grade 8.8 and protective coating from hot or thermodiffusion zinc. It allows using them in different application conditions.

Sleeve of a façade stud is made from polyamide and is characterized by high pull-out loads and a wide temperature range in installation and operation. Façade studs are universal for different types of base. They have a flange preventing contact of expansion element with bracket and a possibility of thermal bypass.

Design of the “correct” façade stud permits to perform quick installation using a hammer with finishing tightening by 0.5 turn in manual mode.

We suggest for the systems of ventilated facades with wood finishing material to use as a vertical supporting profile the soft wood batten treated with preservatives. Contrary to metal, the wood material has a zero coefficient of expansion along the grain and does not require compensation of profile thermal expansion. Besides, the usage of wood battens as a bearing profile is very profitable for energy-efficient properties of façade and significantly improves structural integrity compared to conventional metal subsystems.

General bracket functions – reliability and durability. The former is provided by its shape and geometrical dimensions. In operation façade brackets are subjected to two loads – static and dynamic. Static load is continuous, calculated as a weight of façade by a number of fixing points. Dynamic is variable, calculated by a maximum action of wind pressure, climate and season. Durability of façade bracket must be no less than the façade service life. 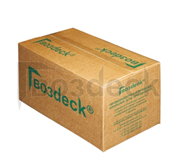 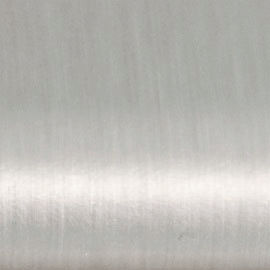 Façade brackets for wood facades are manufactured in two types of protective coat: zinc or zinc with powder coating. A standard solution is factory zinc coating. It ensures the required durability of bracket for 10-15 years of operation in boreal climate. In very humid environment, urban environments, in places with coastal climate an additional protective coat is required. Among all modern protective coats, the highest quality shows powder coating. It has a good adhesion to the base and a high wear resistance. 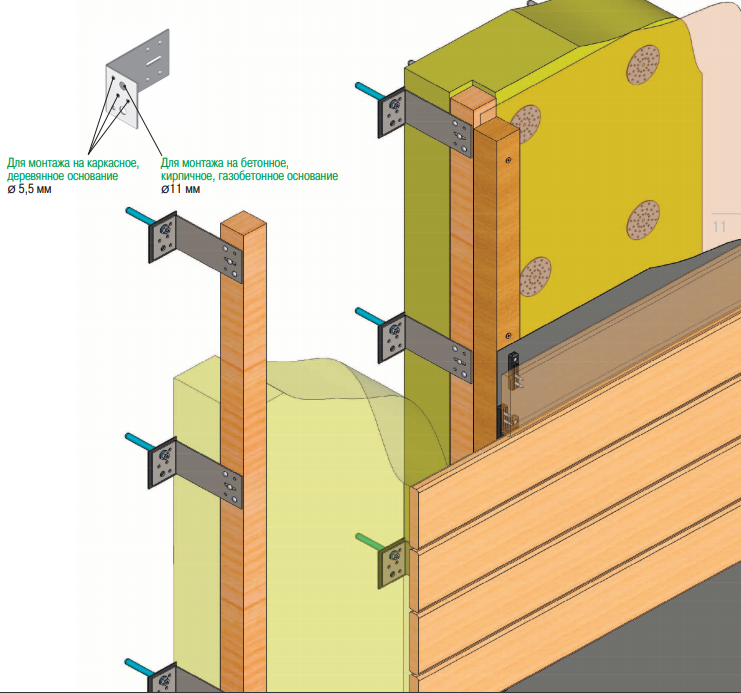 Bracket is installed on the bearing base by the façade stud. The weakest point in the system “bracket-façade stud-bearing base” is a point of attachment to the bearing façade. Selection of a façade stud is performed in testing when the length is chosen which precludes deformation of attaching fitting under 100-kg load.

Façade bracket must be located in strict accordance with the design at a definite pitch. If there is no project documentation, one can make the most of the layout with confirmed feasibility. Specifically, a horizontal pitch of bracket layout should be a multiple of the heat insulation thickness and a vertical pitch = 1 m. Hence, we need 4 fixing points per 1 sq. m of façade. Naturally, this figure in the real world will be slightly bigger because a number of brackets will be added for the corner as well as supplementary brackets for apertures of doors and windows.

A horizontal pitch is a pitch of vertical battens, and a vertical pitch is a distance between points of fixation of brackets to the profile.

How many façade studs are needed for a bracket?

A façade stud is needed when we perform installation on concrete, brick, foam concrete base. FB bracket has only one hole with the diameter of 11 mm for the façade stud.

Installation on skeleton, wood base presumes the use of 2 jack point screws for 6-mm holes.

Number of SVF mounting points (consumption of FB and FAB):

Number of SVF mounting points (consumption of FB and FAB):

Are there any questions? Make a query and we’ll answer without fail!

Thank you! Your application has been submitted